#TDF Stage 10 After the rest: Though one will be getting too much recreation

But over the rest day came the news that Alexandr Kolobnev, the Russian Champion and Olympic Bronze medalist on the Katusha squad failed a drugs test after stage 5 on Wednesday for the diuretic hydrochlorothiazide (HCT). So his team have withdrawn him from the race. 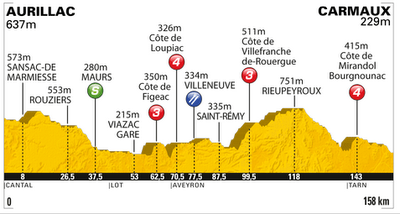 It means that overall there are 19 less riders that we know of starting this stage so 179* will set out from Aurillac towards Carmaux 158 km away.

Today's stage might just see the sprinters' teams try and control the race from the off as the sprint is only 37.5 km into the race. There is a hope that a sprinter rather than someone in a breakaway could get the 20 points on ovver for being first under the green banner.

But even if they don't they will still be racing for it only about an hour into the second period of the Tour. Today's stage is also modestly flat. Yes there are four categorised clims but they are of the lowest two categories the last category 4 is 15km from the end, so this is expected to be another sprinters' day. Mark Cavendish will be gung ho to make it into 18 stage wins (where he will be equal with nobody), Andree Griepel will be trying to time his attack on the Manx Missile better than the run in to Châteauroux, Edvald Boassen Hagen and Ben Swift (SKY) were behind the race that day after waiting to see if Bradley Wiggins needed pacing back to the race, Tyler Farrar is looking for another stage win and Jose Joaquin Rocas is looking to pull points back on Philippe Gilbert in the Green Jersey.

Expect explosions from these guys on the line, but I expect Cavendish to out do them all, once again.

And finally today here's a HTC advert wishing Mark and the team all the best on this year's Tour.

* Since writing this Yaroslav Popovych of Radioshack has also withdrawn making his team ride on with just 6.
Posted by Stephen Glenn at 08:49