Arson not the answer even if words enflame

As I've said before on this blog I'm proud to be an Ulster man. I may also have mentioned that the family heritage comes from the North West of the Province and by that I mean Donegal, which of course is now in the republic.

I was actually rather divided. You see while the family historically is from Donegal, my father's line for at least four generations comes from the city on the Foyle, that give the County of Londonderry its name. Indeed the last Gaelic game I saw live was the Derry v Antrim game at Casement Park after doing some Yes! campaigning outside. 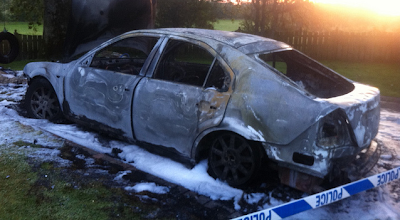 However, this being Northern Ireland you have to be careful of the words you use. In the early hours of Sunday morning the picture to the left shows the remains of the MLA's car after it was torched.

The MLA was disgusted, and quite rightly so, as there is a Oil Cylinder nearby and this inferno was not far from his front door. Yes his is right that arson is too much of a response, no matter how much his inappropriate Tweet enflamed, but of course it was his lack of respect that led to an increase in the heat over this issue. But if we are to start talking about a shared future, maybe Mr McCrea needs to visit the young Gaelic team on the Shankhill Road, which I blogged about the week before his comments.

Maybe if some of our DUP members were to attend a Gaelic game and see that the crowd mingle more like a Rugby crowd than the segregation of an Association Football match. If they see there is less crowd trouble here than at a Linfield v Glentoran game (two team with largely loyalist support). My challenge to Mr McCrea and his DUP colleagues is go to a GAA match with your SDLP and DUP opposite numbers and take them along to a Rugby game. Learn about the sports that many have seen dividing the community in unity, look around you and see people enjoying themselves. Wanting their team to win at the level that they are competing, that is a common trait in all sport for all sections of our community.

If you are elected to represent a constituency you need to represent all of the people, you don't need to support all the same teams but you have to respect those that do follow a team that makes up part of the community that elect you want to see that team win.

We shall find out in 17 July whether Donegal or Derry will be successful in the Ulster Championships.
Posted by Stephen Glenn at 14:59