The mixed up world for Northern Irish foetuses

Here is the world facing the unborn in Northern Ireland in one day....today. 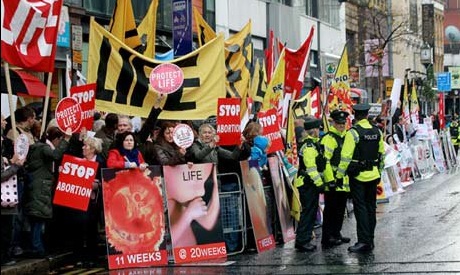 The Marie Stopes clinic in Belfast opened, offering abortion under the tighter that the rest of the UK regulations on who qualifies, to protests (pictured).

The High Court rules that same-sex couples being banned from adopting in Northern Ireland is unlawful.

Despite there being insufficient suitable placements for those currently looking to be adopted the health minister has said that he will challenge that ruling.

Now I suspect that many of those protesting and insisting that the women who wish to abort in Northern Ireland go full term (as well as the over 1000 a year who do not meet the regulations and go elsewhere) would probably support the Health Minister in his challenge. It is the sort of argument that the religiosity of the Pro-Lifers in Northern Ireland would stretch to. So yeah that is the mixed up world an unborn child may face here in Northern Ireland.

The choice a women faces is abide by the 9 weeks gestation rule and only if health physical or mental to the mother is as risk and abort, go elsewhere in the UK, go full term and give up for adoption in an under subscribed field with many not getting adopted. So if the women protested for Pro-Life really want the best for every unborn child have they really thought through all the consequences.

I suspect they haven't, but I also suspect that each women who finds herself pregnant that exercises her own choice without prejudice or judgement from others has considered all the options very carefully based on the reality of their own situation.

Update: No sooner had I posted this than I noticed that BBC NI political editor Mark Devenport was looking at today's events along similar lines.