One giant leap for man

If taking the final step off a ladder unto the moon just below you is "One small step for [a] man, one giant leap for mankind" what is jumping off a platform 39km above the earth?

In the last hour that is precisely what  Felix Baumgartner did.  Following the words from the man whose 52 year-old records he was setting out to break, Joe Kittinger.


"Item 38. stand up on the exterior step but be sure to duck your head down low as you go out that door....The rest is yours."


He had already set the world record for the highest manned balloon flight merely to get himself this high. His leap became the highest altitude for a freefall, something that he did for the next 4 minutes 22 seconds before he deployed his parachute, not a longer time in freefall that Kittinger. Telemetry did indicate that he was traveling at the speed of sound but all the records need to be verified from the GPS and telemetry systems on both Baumgartner's suit and the capsule. But it looks like he's secured three of the four records he set out to achieve.

The delays to his attempt during the week meant that by being the first man to break the sound barrier in freefall Felix did so exactly 65 years after Chuck Yeager became the first man to fly faster than Mach 1 in 1947.

It took him 2hrs 21 minutes to get to the level he needed to start but he was back on earth within 10 minutes. You can watch his jump here. He even made a very impressive landing on his feet at the end of all that.

Update:  Ahead of the press conference back at Mission Command in Roswell this guy was spotted in one of the control seats. 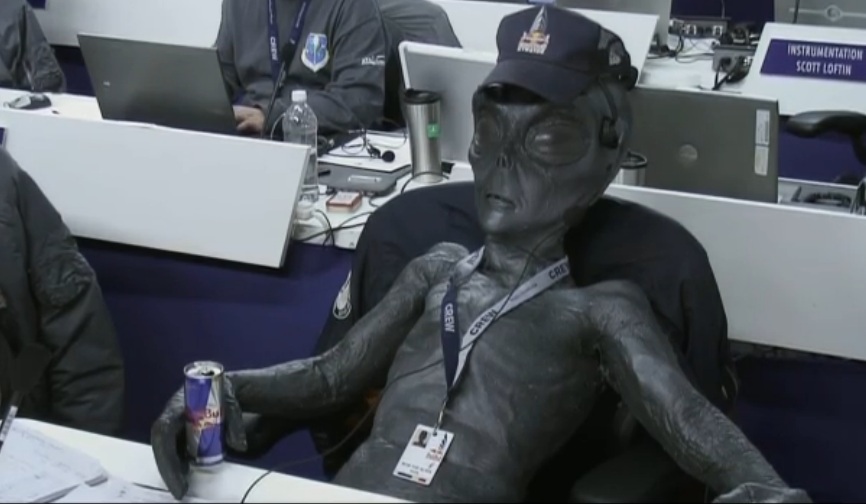 Update 21:34: Confirmation of the numbers of FAI preliminary data: