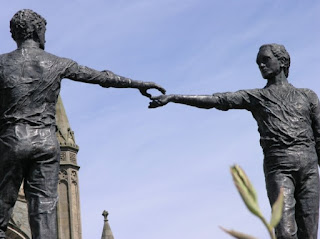 Not from from the little terraced house that my father grew up you will see Hands Across the Divide (pictured right). It is a statue that somes up the hope of peace not just in Londonderry/Derry but across the whole of Northern Ireland.

The two men who best summed up that reaching across the divide are probably John Hume from the city of Derry and David Trimble, who coincidently like me also comes from Bangor, indeed his family went to same church as my mother's family and he went to Sunday School along with her. A young David Trimble is actually pictured in the book about the centenary of the current building of Trinity Presbyterian Church as part of the team working to build the church halls.

However, it was building of something more amorphus than a structure that is still standing that will be Trimble's lasting legacy. It was through that reaching out that he formed a sense of purpose, an image of a peaceful future, a vision of a shared future and a pathway to acheiving that. The people had their say and overwhelmingly supported the agreement that the various parties agreed to. That is truly reaching across the divide, that is what a leader should aim for.

It is with sadness that following on from John Hume's death in 2020, David, Baron Trimble of Lisnagarvey has passed away today. In 1998 the two men shared the Nobel Peace Prize and in his Nobel Speach David summed up the state of Northern Ireland poignantly when he said.

Those words are as relevant today as they were back in 1998, more so, as once once again our Assembly is struggling to get up an running. Our politicians need to look as Trimble and Hume and Seamus Mallon who served as Deputy First Minister and the example they gave of working for everyone. Trimble took a lot of abuse from some within Unionism for reaching out to the Nationalist traditions, but the peace has held largely, the devolved Assembly and continued on with several periods of strife, but carries on mostly and the people want it to work.

He was one of the architects of something that many of us thought would never come to be. Even when his party and Hume's lost their prominence in their two communities, the two traditions continued to work together towards that peace.

Tonight the thoughts and prayers are many are rightfully with Lady Trimble and his family. In our tomorrows people in Northern Ireland need to reflect upon what Trimble and Hume helped to bring about and work towards enhancing that legacy to make it truly one moral denomication of working together for all.