In four days time well be remember all those who fell in both World Wars as we mark the eleventh day of the eleventh month in 1918 when the Armistice was signed and First World War came to an end. It is possible that in one house in Yorkshire that celebration was the same as the rest of the nation, looking forward to the time that they would see their elder surviving son once again. But is it likely they within days their celebrations we cut shot when the fearful letter came through the door. Like many families while others were celebrating the end of war, they were coming to terms with the fact that their son was so close to seeing the end of the war, only to be cut down. He is the last of those from my family tree that I shall be looking at in this series. 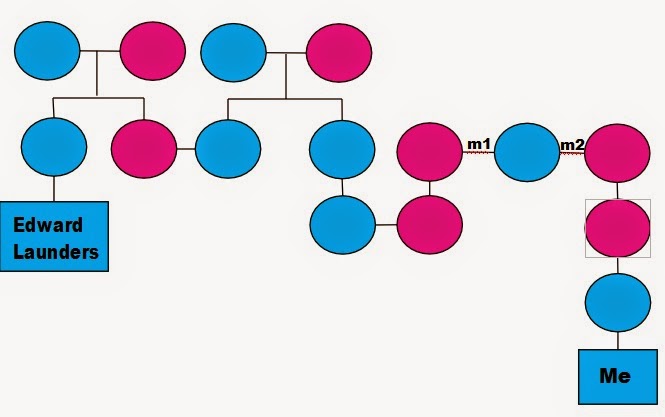 Edward Launders is related though the following connections. His father's sister had married a Jones in Yorkshire. One of the nephews of that aunt was a Prisoner of War in the conflict who was later to marry my great aunt (a lady I was never to meet she dying six years before I was born. That relationship (as with the others I have written about in this series) is graphically shown (right).

Edward was born in Grimesthorpe, Sheffield, Yorkshire in early 1898, to John Thomas Launders and Bessie Cripps. On the 1911 census when he was just 13 he was an apprentice moulder at one of the Iron works in the city. His father on the 1901 census was recorded as a furnace man at steel works, but by 1911 appears to be either a lincekeeper (or maybe timekeeper).  Along with his four sisters (two elder and two younger) and infant brother who at one two would be too young to be involved in the war. 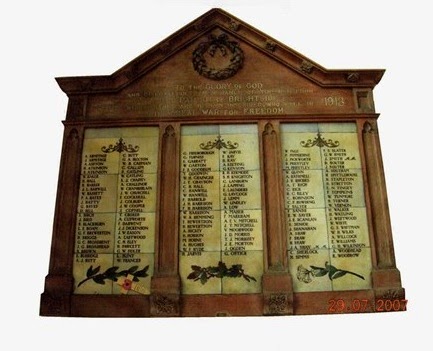 He joined the Royal Field Artillery and was a signalman with the. He would have been involved in the last offensive of his unit the Battle of the Selle, which he returned from, they were relieved by the 38th Welsh Division on the night of the 26th October 1918 after capturing Englefontaine. They spent a period of rest at Troisvilles before re-entering the line on 5 November advancing through Forêt de Mormal. On the 7th November they were on a line east of the Avesnes-Maubeuge road. But one of the victims in achieving this goal was Edward who fell on that day. That evening his Division was relieved again by the Welsh and retired to Sambre valley near Leval. His division never saw active duty again before the Armistice therefore making him one of their last fatalities.

His name is amongst those residents of Grimesthorpe that was listed on the memorial that used to hang in St Thomas' Church, Holywell Street in the town (see above).

We will remember him.
Posted by Stephen Glenn at 11:00