Along side Ian Paisley one of the earliest politicians I knew about was James Molyneaux who from 1979 until 1995 served as leader of the Ulster Unionist Party. Indeed the two were the ever presents in my formative years of political awareness. 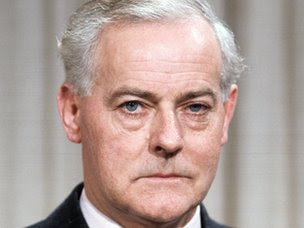 He had been a teenager at the outbreak of World War II and growing up near Aldergrove, which is now the location of Belfast International Airport he joined the Royal Air Force in 1941, and served through the war as was one of those involved in the liberation of Belsen concentration camp.

He was first elected to a seat on Antrim County Council in the 1960s and in the 1970 General Election he entered Westminster succeeding his party colleague Knox Cunningham, who had served as a PPS to Harold Macmillan while PM, in the South Antrim seat.

After his second defence of his seat in the October 1974 election he became leader of the Ulster Unionists in the Commons, because the party leader Harry West had lost his Fermanagh and South Tyrone seat. However, after West failed to get elected to the European Parliament in 1979 and resigned as leader Molyneaux took over as leader of the party. His tenure as leader of the party of 16 years and 1 day is only exceeded in length by those of Viscount Craigavon and Viscount Brookeborough (the first and third Prime Ministers of Northern Ireland).

In the 1983 election with his seat split in two he became the MP for Lagan Valley, a seat he would hold until he retired in 1997. Through his leadership he was seen as someone who wasn't in favour of really reintroducing a new Northern Irish Assembly or Parliament but a supporter of direct rule with more powers devolved to the councils. However, he also started to see the loss of ground to the DUP. Although it appears his time as leader he was not doing much to advance Northern Ireland, he was using his diplomatic skills to keep the party together with factions wanting to head towards devolution and others for maintaining direct rule, something that soon came to the fore under his successor.

In 1995 he was challenged for the party leadership by a 21-year-old student from Coleraine, Lee Reynolds. Although he won successfully 15% of the party voted for the challenger with no experience and this was seen as a significant protest against his leadership. Two days after the result was announced the death of Jim Kilfedder, the one time Ulster Unionist but then Popular Unionist Party MP for North Down, on a train in from Gatwick.

The subsequent by election saw Molyneaux's party facing a tough challenge to return this seat to the Ulster Unionist fold from another former Ulster Unionist Bob McCartney standing and UK Unionist Party candidate. Possibly as a result of not challenging Kilfedder since 1983 or maybe as a sign of discontent with Ulster Unionism their candidate came a distant second with 26.4% only just beating the former Alliance Party leader Oliver Napier. This poor show lead to Molyneaux's resignation as leader, ironically being replaced by a North Down native, David Trimble.

Upon his retirement as leader he was created a Knight, and when he stepped down from the House of Commons in the 1997 election he was elevated to the House of Lords.

Molyneaus was vociferous in his opposition to the Good Friday Agreement and supported the three UUP MPs Jeffrey Donaldson, David Burnside and Martin Smyth when they resigned the party whip over the parties support of the Agreement.  In 2005 he along with Smyth backed the DUP's Jimmy Spratt over the UUP's candidate Michael McGimpsey in South Belfast, as well as his successor in Lagan Valley, Donaldson who had by then defected to the DUP, but he also supported some UUP anti-agreement candidates such as Burnside in South Antrim. Of these only Donaldson was successful and the South Belfast seat fell to the SDLP's Alisdair McDonnell but Trimble was no happy with his predecessor's interference though he reigned after losing not only his own seat, but every other incumbent Ulster Unionist MP or held seat, ironically the only Ulster Unionist returned for Sylvia, Lady Hermon in the same North Down seat that had played a part in the downfall of Molyneaux

Molyneaux never married, and as well as his role in politics was Sovereign Grand Master of the Royal Black Preceptory from 1971 -1995. Although seen as the leader of unionist for most of his career he was for a short while educated in the local Catholic primary school and helped to raise money when a Catholic Church near his home was burnt down by loyalist arsonists.