The other Westminster by election

Last week at this time I would have been 3 hours into my polling day, this week I'll most likely still be under the covers waiting for my alarm to go off. But it is polling day and this time it is in Mid Ulster the seat vacated by Martin McGuinness. 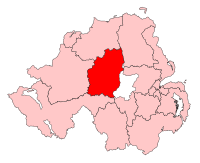 Unlike last week's 14 candidates there are just 4, which in itself is small for a Northern Irish seat.

It has long been suspected and known since December last year that Sinn Féin would be standing Francie Molloy. He has been one of the MLAs for the area since the first Assembly elections, and seeing as Sinn Féin don't take their Westminster seats if he is elected to succeed his party colleague it will not been seen in their eyes as double-jobbing.

The DUP, UUP and TUV have gathered together to agree one Unionist candidate and on Valentines Day the two big unionist parties said that they would be supporting Nigel Lutton a local victims campaigner and undertaker. But more intriguingly his father Eric was killed by the IRA back in 1979, the Upper Bann DUP MP David Simpson, for who Lutton once worked used Parliamentary privilege six years ago to name Molloy as a suspect in the killing.

The SDLP have also chosen their MLA for the area Patsy McGlone. Although he has only served in that role since the  second elections in 2003. During the election campaign in 2011 his car was attacked by a petrol bomb outside his house.

The Alliance Party have chosen former headmaster Eric Bullick as their candidate. But as in many such polarised seats the Alliance base from 2010 is not good, only taking 1% of the vote then. The following year their candidate was eliminated after the third round in the Assembly elections.

As I said far too many times during the yes campaign Mid Ulster was one of the only three Northern Ireland seats that had elected an MP with a majority rather than a plurality of the vote. So even the Unionist attempt to put all their vote in one basket is unlikely to garner much more than the the 32% that their three respective candidates took between them in 2010. So a third of the vote will be unlikely to take this seat off a republican or nationalist.