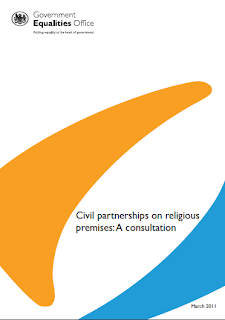 I read today that Chris Bryant is wading into the issue of Civil Partnerships in religious buildings. However, he seems to be wading in with ignorance and getting caught up in some quick sand.

Now as a Liberal Democrat I believe that no-one shall be enslaved by poverty, ignorance or conformity so let me release the Labour MP from his ignorance induced slavery.

The consultation that has gone out, allows the religious symbols that are embedded in a religious building to remain in place, it does not allow them to be used in the civil partnership ceremony. 3.23 of the consultation paper page 31.

Bryant thinks the use of the 'hymn' Jerusalem would be allowed in a civil partnership in a religious building, read on to section 3.24 (page 32).

So there has to be a clear distinction. The minister or religious celebrant cannot take part in the civil partnership registration, nor the registrar in the religious element. See what section 3.25 says:

So therefore there will be a separate service in a place of worship after the registration. It can happen in the same building. Now of course there are a group of heterosexual couples who may have a civil marriage and then a religious blessing. These are normally people who are divorced marrying another partner. Their marriage in a place of worship is not banned by civil law, look at Princess Anne getting remarried in Grathie Church near Balmoral as an example, but by canon law as laid out in the Church of England as the prime example.

Where the difference lies is that where a religious group want to allow a religious same-sex marriage with the interlinking of the legal necessities and the religious elements as with all religious marriages that is not possible. That is where the House of Commons can provide enabling legislation to allow that to occur. That is where religious groups that wish to do so can be freed to provide the service that some same sex couples of faith would desire.
Posted by Stephen Glenn at 16:38