Poor Peter Brookes The Times cartoonist had a tough time at Labour's conference yestreday as he attempted to encapsulate the passion in Gordon Brown's speech. Judge for yourself how he did in this series of images. 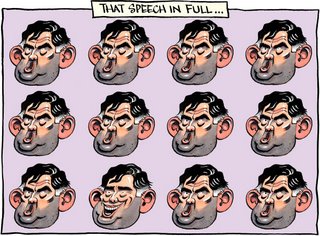 Personally I reckon the 10th image must have been his joke about the Arctic Monkeys and the Arctic Circle.
Posted by Stephen Glenn at 12:36